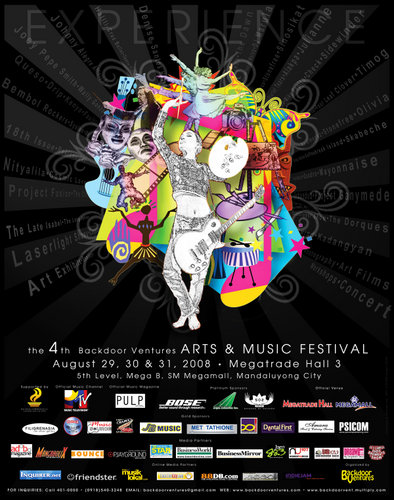 Avalon.ph will participate as an exhibitor, primarily of Moleskine Notebooks and Arts, Poetry & Music related books.

Now on its 4th year, the BACKDOOR VENTURES ARTS & MUSIC FESTIVAL takes it a notch higher yet again to deliver exactly what its growing and diversifying audience looks forward to – a grander lineup of performances, more exceptional artworks, and an extensive array of workshops & symposia catering to art enthusiasts of all ages. Guests can expect an even more enjoyable trade fair experience with the splendid listing of concessionaires and participating institutions.

Schedule and Performers subject to change without prior notice.

The Graveyard Book is Neil Gaiman’s upcoming book scheduled for official release on September 30, 2008. This is a review made from an ADVANCE READER’S EDITION made from uncorrected proofs. 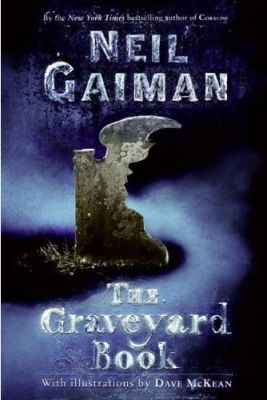 Reprinted with permission in collaboration with Avalon.ph, from the blog of Mr. Joey Nacino:

If one were of suspicious nature, one could accuse Gaiman of having a fixation with Death and all its accoutrements. One of Gaiman’s most popular works of fictions is his vision of Death—a pale, thin Goth girl in black with the personality of Mary Poppins—in his seminal The Sandman comic book series. Though Gaiman relates the seed of this tale lay elsewhere, it does seem that Gaiman has hopes that mortality has a friendlier face than imagined.

At the start of this book, Gaiman pulls no punches as he writes of the aftermath of the death of a family at the hands of a human monster named Jack. The sole survivor is a babe who manages to escape and slip into a nearby graveyard where he attracts the attention of an old ghostly couple, the Owenses. Thanks to the stubbornness of Mrs. Owens, the babe is allowed to become part of the graveyard community and is given the ‘Freedom of the Graveyard’ with its inherent powers and abilities. The new-named Bod—short for ‘Nobody’—also gains a guardian in Silas, a mysterious figure that roams the graveyard, as well as the support of the Grey Lady, a being revered by graveyard ghosts (shades of the pixie-like Death, the sister of Dream?).

From here, Bod’s life living among the dead and the fixtures of the dead leisurely expands as Gaiman reveals the world behind the veil. From the Dance Macabray that draws the living and the dead at least once a year to the Honor Guard—a group to which Silas belongs—that protects the borders in-between the living and the dead, Gaiman creates an imaginative ‘neither’ world with his trademark flourish.

Whereas the opening perspective of Gaiman’s previous works, American Gods and Anansi Boys, was older and adult, Interworld and Coraline seemed to be directed at younger readers. For this one, readers from YA to adult-range will be able to jump into The Graveyard Book with no trouble. Gaiman writes an engaging tale, from the friendly narrative voice that easily draws the reader into the story to the likeable characters. In fact, it was easy to sympathize with Bod, who grows up into a mature, level-headed young man faced with a dark past.

Since the theme of the book is Death, Gaiman knows that there are no happy endings except the endings we make for our own. And so, the ending of the book is a beginning of sorts, a hallmark of all stories Gaimanesque (an invented word, but sorely appropriate). After all, only Neil Gaiman can create a imaginative story that draws us to worlds beyond our own, makes us root for his characters, and in the end leaves us wanting more. The Graveyard Book is indeed, a first-rate story from a grand—and great—storyteller.(And just in case you’re wondering, yes, us Filipinos are mentioned in this book!)

Reprinted with permission in collaboration with Avalon.ph, from the blog of Mr. Charles Tan:

The Graveyard Book by Neil Gaiman

While I did enjoy most of Gaiman’s novels, his last book, Anansi Boys, in my opinion wasn’t the best of the bunch. When I started reading The Graveyard Book however, any lingering disappointments were dispelled as this is Gaiman in top form. His language is simple, compelling, and has that particular charm of being vague and short but says it all, as if everyone was familiar with its context. His characters are complex and interesting, from the adopted family of our protagonist to his enigmatic enemies. One impressive technique is how Gaiman never explicitly mentions what kind of creature the hero’s guardian–Silas–is yet it is apparent to readers thanks to context clues and dialogue. The antagonists, while two-dimensional, are given that extra layer near the end of the book which can probably be best described as the book’s “Gaiman-ish” moment.

The structure of the book is also to be lauded. There are eight chapters, each representing a phase in our hero’s life. Each chapter save for one (it’s a foreshadowing chapter) stands well on its own and doesn’t leave you in a cliffhanger. However, that doesn’t mean the book is any less interesting because of it and Gaiman writes it so that one is eager for what comes next. There’s a big pay-off in the end as Gaiman works with all the threads he established previously yet leaving room for expansion and conflict–all the while satisfying the target audience of the book.

Overall, The Graveyard Book is highly recommended and one of Gaiman’s books that pack a punch irregardless of your age group. The characterization, its pacing, and the writing style are all synchronized and culminate to an enjoyable and layered reading experience.

The auction for an Advance Reader’s Edition is still ongoing and will end on August 21.  Click here for the link.  An excellent gift for the die-hard Neil Gaiman fan.  Good luck bidders!

Announcement (08/17/2008, 14:26): There is a temporary issue with our e-mail servers @ avalon.  The site is sending out e-mails but we don’t get everything sent to our inbox.  This issue started 10:00pm (Manila time), August 16.  If you tried to contact us during that period, please resend it through Contact Us.  We already forwarded all incoming e-mails (Contact Us, etc) to a back-up e-mail addres.

All e-mails sent to (anti-spam): username[at]avalon dotph will be delayed.

This entry will be updated as soon as everything is back to normal.  Sorry for the inconvenience.